A Taste of Italy

A taste of Puglia - Italy's achilles... it's the place to be

An excited group of eight Light and Landers arrived in Puglia ready for our adventure based at two hotels - The San Martin in Giovinazzo and The Hotel Lanzilotta in Alberobello.

The first part of the tour was based about 20 minutes north of Bari in the coastal town of Giovinazzo. A wonderful place to start the tour with its narrow cobbled streets and marina, it's like stepping back in time.

Our first full day was spent photographing the ancient town of Matera, the European City of Culture for 2019. Although being significantly renovated, great attention is being given to keeping the charm of this UNESCO world heritage site. The town has been inhabited for around 7000 years, was nearly abandoned but was saved in the 60's by Hollywood film makers who discovered it and used it as a backdrop to many movies.

Lunch is always a highlight after a hard morning. I thought I’d picked a really quiet restaurant with plenty of tables but as soon as we ordered I realised that occasionally I should be more observant and not get us a table in the middle of a building site - despite the lorries and drilling the food was delicious!

Over the next couple of days we explored the coastal towns of Pogliano a Mare, San Vito, shooting dawn to dusk. Well let's just say most of the group managed dawn, some didn’t even make breakfast!

We transferred to our next hotel in Alberobello, arriving in time to capture the festival of lights and the celebration of the Saints Cosmas and Damien, which featured a candlelight procession through the streets with bands, and the town dignitaries all either taking part of lining the streets.

Each town in Puglia has a very different feel, Ostuni - The White City - transports you to Greece, again winding alleys and bright flowers tumbling from baskets caught everyones eye.

Because of the rain encountered during one day, I set a wet weather picture challenge - which most shot from the comfort of our restaurant. Helen bought two umbrellas from a local trader who seemed to think she may buy a third!

Much to the disgust of some of the group I dragged them into a ruined Trulli - these conical shaped homes litter the area, many renovated but some abandoned. Amid the debris, dead birds and rotting vegetation was a sofa left by the previous owner and a bottle of wine, which made for an interesting still life.

Another common sight are Olive groves, again my team dived in looked at the lines, patterns and strong silhouettes of the trees against the wonderful light, Adam even produced his infrared camera for the occasion.

As our shoes got heavier with mud we were finally asked to leave by an aging farmer on his ancient tractor. All very friendly thankfully

Another popular spot was Locorotondo, where I set the 50mm challenge that must include a local, NOT a tourist or PHOTOGRAPHER - this pushed some members of the group - including me - well outside our comfort zones. Caroline particularly did well as once she started talking to locals she didn’t stop and Mandy appeared to have charmed every older man in the social centre to allow her to photograph them during a very intense game of cards.

One thing dominated this workshop  - laughter - it was non-stop. Jon led the way ably assisted by Terry and Edie with thankfully Matthew offering a restraining hand when things threatened to go too far.

Each member of the group approached every subject differently and saw the locations through their own eyes which I personally found inspiring, they were encouraging of each other and as a result they each got some incredible images.

By the time we left the area we had seen enough Trullis to last a lifetime and when asked if they needed to shoot one more the sound of Edie’s voice still rings in my ears.... NO! 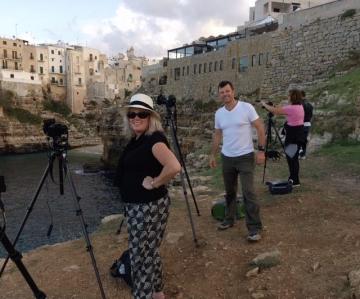 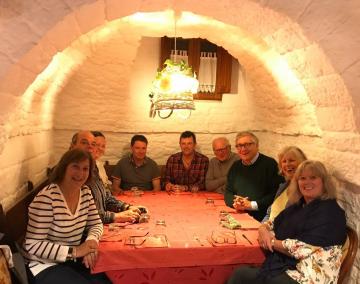