Q&A:  Damien Demolder reflects on his life in photography over the last year

Today’s photo chit-chat comes from street photographer extraordinaire, Damien Demolder, who looks back on a busy year in the wonderful world of photography. 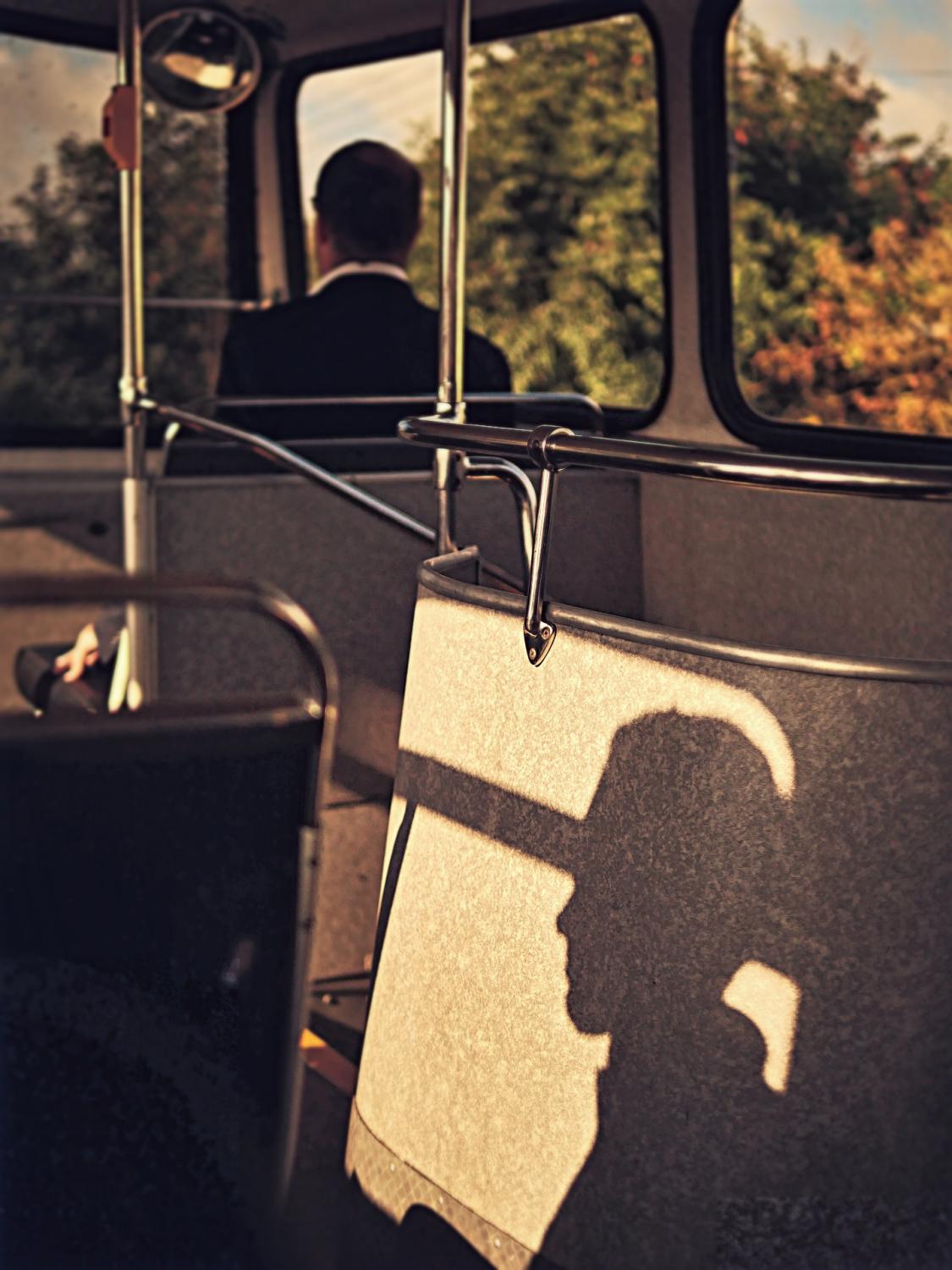 Which image would you highlight from 2018?

“I am currently in love with this picture I took on the bus at the end of July. I keep thinking about it, and every time I look at it expecting the magic to have worn off I find it is still there - and that makes me very happy. I like it partly because it was really hard to take (not a very good reason I know) as the shadow was moving around like mad as the bus weaved its way through some very windy roads. I also like it for its physical depth, that it is a little unexpected, and primarily because the subject is so every-day and unremarkable in its own right but extremely exciting when picked out and drawn to the viewer's attention. Well, I think so anyway. It represents all that I hoped to achieve this year, and to me shows me that I'm keeping up with my expectations and even developing as a photographer. I have 99,999 images that prove the opposite, but I'm choosing to ignore those”.

“I went through a period at the beginning of the year of shooting lots of pictures that were boring and it took me a while to realise why. They lacked depth - physical depth through composition, and intellectual depth because they weren't really saying anything or anything that I hadn't said a hundred times before. It was quite worrying, but I managed to get over it in the first instance by paying more attention to my foreground - like actually making an effort to ensure I had some. Having spotted something I wanted to shoot I'd find the obvious angle and shoot that, and then make a conscious effort to find another angle a little more unexpected. Practising this has really helped me, and led to me recomposing the bus picture to include the back of the chair in front of me - to create a greater sense of depth and of being there”.

Is there an interesting book (or exhibition or piece of music etc) you’ve read (seen, listened to etc.) in 2018 that you’d like to share?

“I was very lucky indeed to have been asked to take portraits of some of the musicians that were going to be performing in the BBC Proms for this year's Prom Guide Book. It inevitably put me in close proximity to some extremely talented and creative people, and hearing them perform in my own little private concerts while I shot them was an amazing privilege. I took my family to see one of them, Jacob Collier, perform his prom and it was quite an incredible experience. Seeing and hearing what musicians can do, on their own and together, is deeply inspirational. It pushes me along to develop myself and the way I work. Can I put as much passion into my photography as they do into their music, and how can I express such depth of feeling just using light, lines, shapes and colours?

Is there a photographer whose work you’ve come across in 2018 that has really inspired or impressed you?

“Judging competitions and managing an on-line gallery are two fabulous parts of my job as they constantly bring me into contact with the work of other photographers, both professional and enthusiast. People striving to be their best inspires me and I love looking at what they produce - so I am always finding new discoveries that impress and excite me. Instagram is also full of people who's work fires me up.

If you want a name though I'll point you in the direction of Alys Tomlinson, the winner of this year's Sony World Photography Awards. Some of her work conjures a modern-day Julia Margaret Cameron - except Alys likes to focus the camera before she shoots! I love how sensitive her pictures are, and the careful craft that must go into them to make them look so effortless”.

What food do you take on a shoot?

“I like to travel light and don't have room under my hat for marmalade sandwiches or flasks of tea. Most Light & Land leaders head to the back of beyond to find their serene locations, while I head for 'civilisation' and lands of cafes and bars, so I don't need to carry my supplies. I have been known to eat three 'square' meals in Greggs three days in a row when conditions require it. I'm not dead yet.

My dietary requirements are that it should be quick and not too hot, as I don't want to be sitting there wasting time. I'd rather be out shooting - unless the cafe's clientele is interesting of course.”

If you could have any photographer(s) (dead or alive)  over for Christmas drinks who would they be... and why (briefly)?

“I'm not especially fussy about who I talk photography with, so I would be happy with anyone who has a different viewpoint to my own, but I would be extra-specially thrilled to share mince pies and chat with Julia Margaret Cameron. Her views on photography conflicted with almost everyone's in her day and it would be fun to hear what she thinks of the way we work today. The way she thought about her work and the thinking that went into the methods she used still have massive value today. I'd love some of that to rub off on me. And I expect she'd be quite a hoot.

Who has been a photographic influence on you?

“Believe it or not, I take my inspiration from Julia Margaret Cameron. That influence may not be very evident in all my work, but I try to follow her sensitivity for the subject and the story around it, and a feeling of passion and visual romance. I think I share her disregard for what authority deems 'good' and prefer to follow my own path and values. Sometimes they nicely coincide with what authority approves of, but other times they don't. Cameron is my photo-hero.

What's your favourite place on Earth to take photographs?

“My favourite place to take pictures is in a city with narrow streets and in which it is always one of those days where the sun is low in the sky. The buildings are tall and impressive, but on the corners there are little shops with windows that allow you to see right through from one street to the other. It is always busy, and is one of those patches of the city that used to be run down but is becoming a cultural hub filled with artists, people that like to express themselves and a population that loves to live out on the street. Within a short walk you can see ancient and modern architecture, glass, brick, ridged concrete pillars and hard sharp corners among gentle curves and long winding patterns. The low angle of the sunlight shows the multitude of textures and shapes in exaggerated 3D, while reflections in the windows high up on the sides of the buildings create gentle spotlights on the pavement below to give the friendly face in the crowd their 1/15th second of fame.

That place could be London, or New York, Berlin, Madrid, Warsaw or any major city - or town for that matter”.

How do relax after a long day shooting?

“I'd like to say that I run a hot bath and listen to classical music while I soak my aches away, but the honest truth is that I shoot some more, especially if I'm somewhere interesting. I hate to think that I might be missing something or that there are amazing places to shoot that I haven't discovered. I may need hypnosis.

What's the most exciting bit of photo tech news from 2018?

“2018 has been the most incredible year for photography in terms of the way our equipment is developing. I'm a big fan of small cameras that shoot silently and quickly, and have been blessed with the Lumix GX9 and the Lumix LX100 II this year. I'm also excited by the move to mirrorless full frame that has really kicked off now, and have been particularly impressed with the Nikon Z7. We've had some nice fast lenses too - another favourite thing of mine - and the new Leica 75mm f/2 for the SL has been a highlight of my testing year. It isn't cheap,  but sadly it is worth every penny.

I'm also very excited by the new Zeiss ZX1 compact camera that comes with a big screen and a version of Lightroom installed, and the Phase One IQ4 medium format backs that allow us to use elements of the Capture One image editing program in-camera. In-camera raw processing when it's done well is a marvellous thing, as it saves me hours when I get home if I can do it on the fly. Most of the pictures I show from Lumix cameras are processed that way. It is the future”.