15 of the world’s most photogenic buildings

Around the world, architectural works of art continue to fascinate travellers and photographers, from the Taj Mahal to Palacio da Pena. Here, 15 of the world’s best travel bloggers pick the most impressive and photogenic buildings that stood out from their travels. 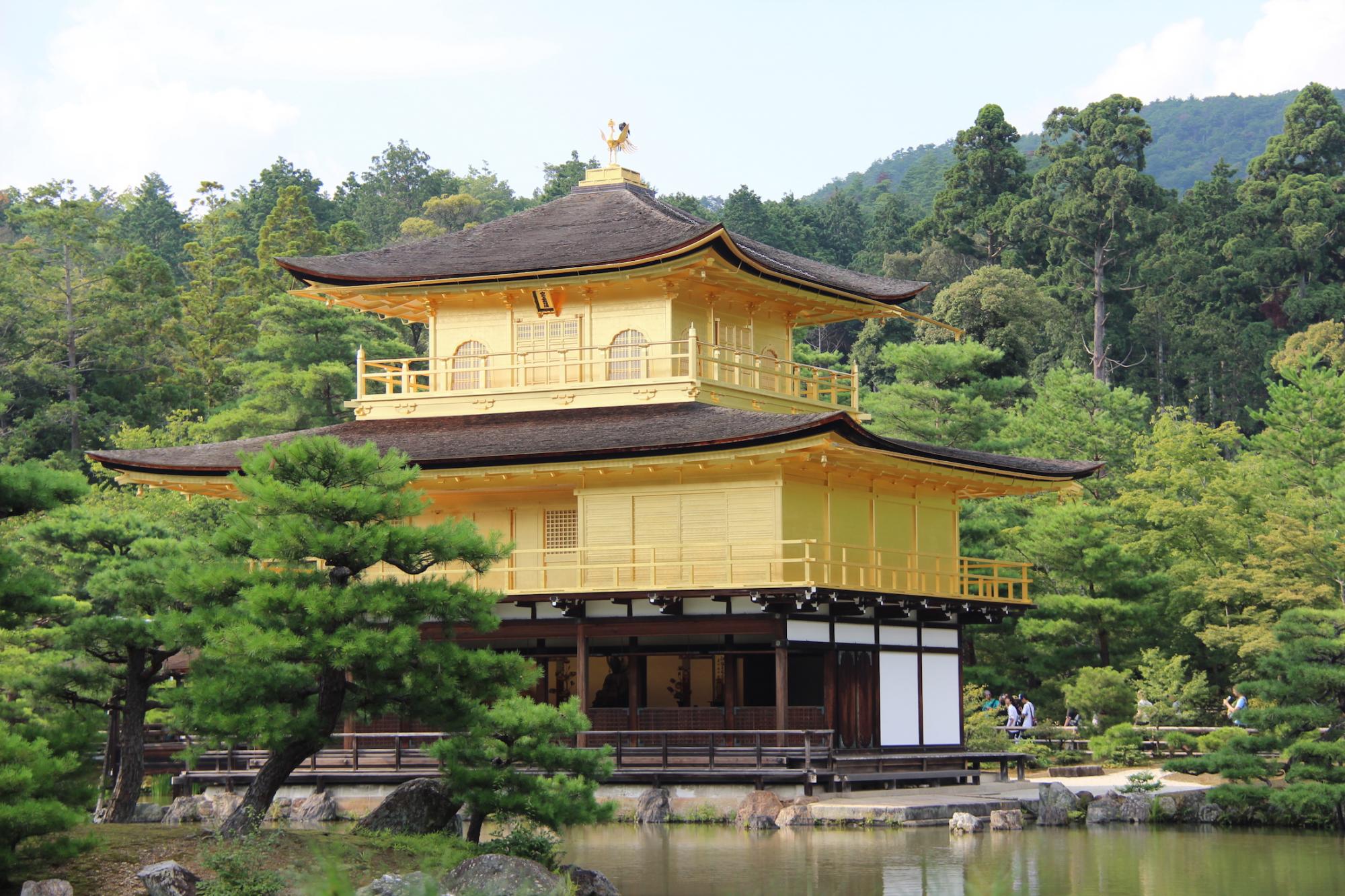 You’ve probably seen photos of the beautiful Golden Pavilion (Kinkaku-ji) in Kyoto, Japan. The serene scene usually involves the Zen Buddhist temple as it’s reflected into the pond that surrounds the pavilion. In reality, the experience isn't often as quiet and serene as it seems, as the building is one of the most popular in Japan with both international and Japanese tourists.

But visiting the Golden Pavilion and finding your own creative photographic take on it is a must on a trip to Kyoto. Once you’ve clicked the shutter, spend time admiring the gardens before continuing to the Sekkatei Teahouse.

Places of worship are some of the most impressive buildings across the world. The Sagrada Familia in Barcelona is an extraordinary building that I enjoy visiting again and again. What makes the Sagrada Familia so special for me is not just the fantastical architecture and passion of Antoni Gaudi but I find there’s always something new to see every time to visit, as, even now, 90 years after Gaudi’s death, this huge church is still being built.

The outside façade is striking and so unique. Each side looks entirely different. The interior of the church is heavenly.

The views over Barcelona from the towers are another reason to visit. The dedication of those who continue with Gaudi’s labour of love to complete this mammoth project that has stretched over three centuries is just as impressive as the architecture. 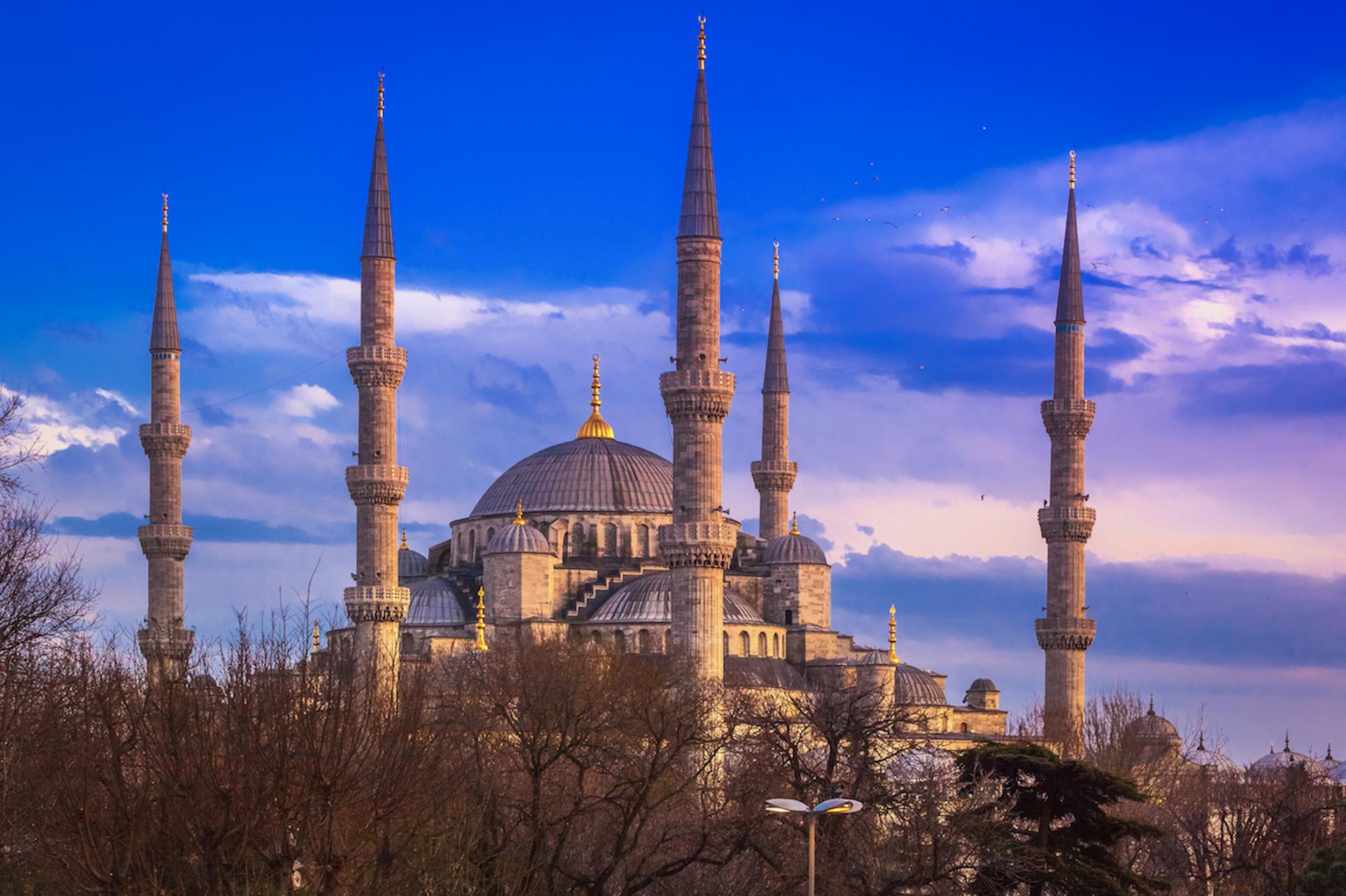 We’ve had the good fortune to see some of the greatest skylines on Earth, from Shanghai to New York, but there is something about Istanbul that keeps us coming back. The Sultanahmet Mosque is better known by its nickname: the Blue Mosque. Its six minarets dominate the skyline of the old city, while looking back from the Bosphoros.

You may wonder why it is known as the Blue Mosque when it isn’t even remotely blue, but it became famous around the world because of the more than 20,000 blue ceramic tiles adorning its inside ceiling and walls.

Claudia Tavani (My Adventures Across the World) 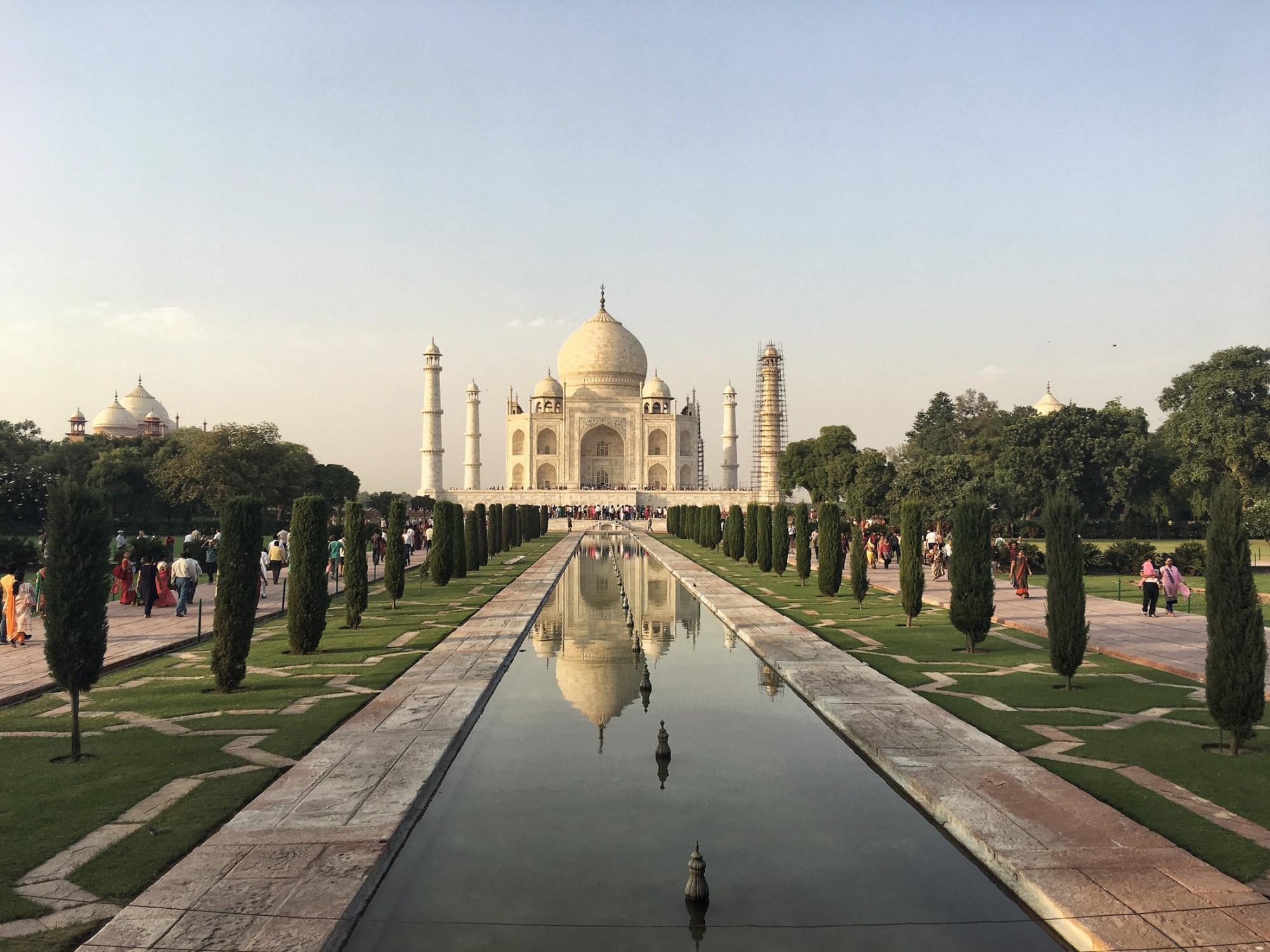 Taj Mahal is one of the best places to visit in India. The site, in Agra, can be crowded, but I was so focused on its beauty when I visited that I didn’t even take notice of the multitudes of tourists around me.

My tip to best enjoy the Taj Mahal is to plan to be on the site at around 3pm and to stay until sunset, when the light becomes simply magical. Also, don’t forget to look behind you when standing on the terrace of the main building. The view of the entrance with the beautifully kept gardens leading to the Taj is incredible.

The Cattedrale di Santa Maria del Fiore, also known as Florence Cathedral or The Duomo, is the main church of Florence and a must-see for anyone who visits the city.

When I first stood in front of this cathedral complex, I was in awe, and I still am. The details are priceless. The Duomo almost feels unreal, even though you see it with your own eyes. Unfortunately, they don't make masterpieces like this anymore. It's probably the most detailed church I've ever seen.

This is one of my favourite buildings, as well as a favourite photo spot. Go early in the morning, when there are no tourists. It's really something special to see it and photograph it at that time.

The Hungarian Parliament Building is one of the most impressive constructions in the world. It’s positioned in Budapest’s prime location, facing the Danube river, with stunning views of the Buda Castle.

The building has a Gothic Revival style. It was inaugurated on the 1000th anniversary of the country in 1896, although it was fully complete only on 1904.

To snap the best photos of the Hungarian Parliament, head to Margaret bridge or cross the Danube river to frame the whole building.

Built high on top of the hills at Sintra, near Lisbon, Portugal’s Palácio da Pena is one of the most striking buildings in the country. King Fernando II acquired the building in the mid-19th century and, inspired by the fairytale castles of Germany, turned the abandoned monastery into an extravagant palace that dominates the landscape.

One of the most beautiful things about Palácio da Pena is its contrasting colours, and these bear significance: the palace’s crimson red parts denote the old monastery, while the ochre yellow side represents the additions made to the building as it was brought back to life.

8: Cathedral of the Resurrection of Christ, Russia

The Church of the Savior on Spilled Blood in St. Petersburg, Russia is one of the most impressive buildings we’ve ever seen. That’s not the official name. It is formally known as the Cathedral of the Resurrection of Christ.

This building reeks of imperial Russia with its wildly colorful onion domes and plenty of gold gilding. The odd nickname comes from this being the site where Emperor Alexander II was fatally wounded in March of 1881. 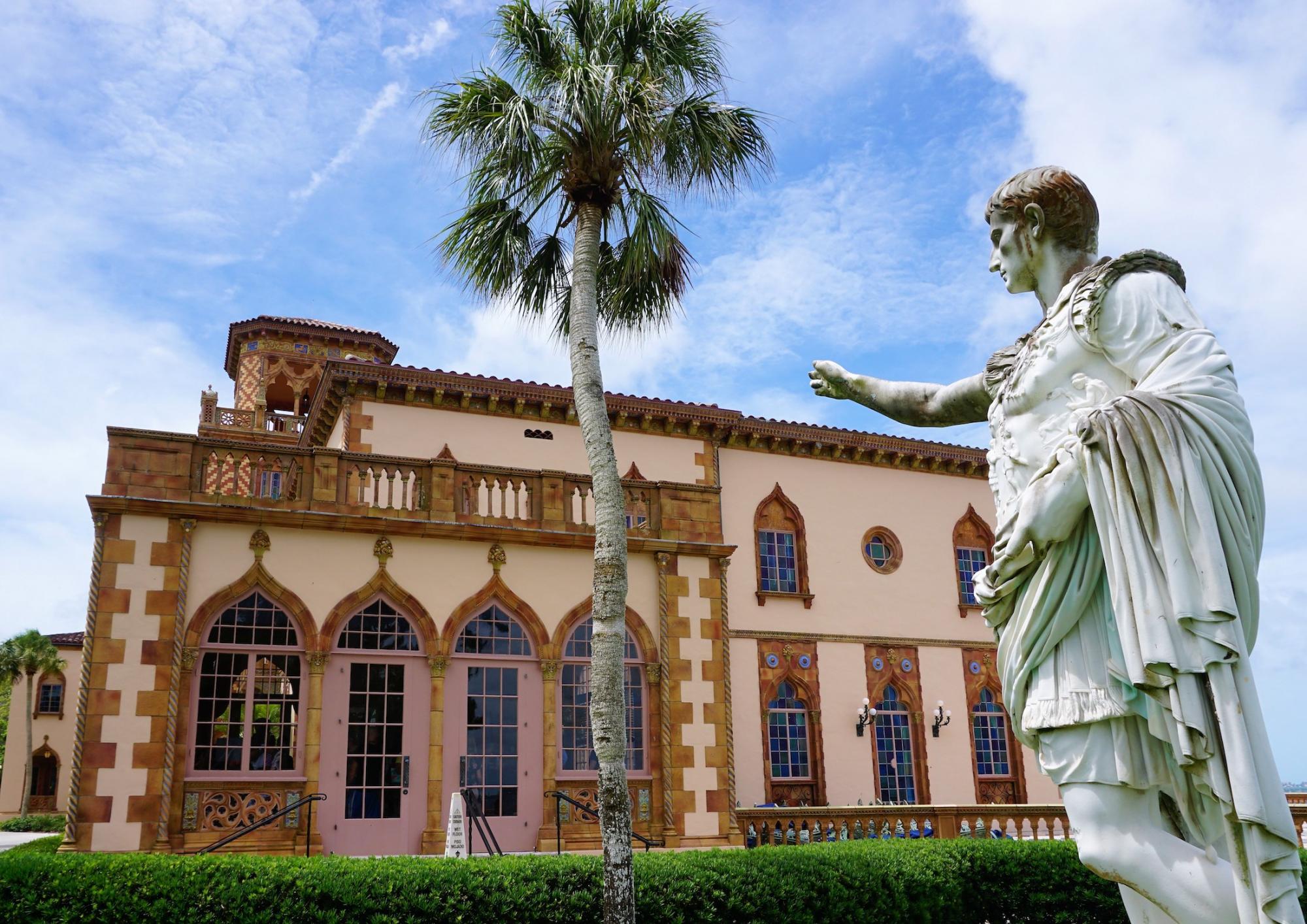 Ca’ d’Zan Mansion is a five-story, 56-room mansion at the Ringling Museum of Art on Sarasota, Florida’s waterfront. It was built by circus magnate John Ringling and his wife Mable. The name and décor reflect the couple’s love of Venice, Italy.

Built in 1926, colorful stained glass complements the mansion’s stucco and terra cotta exterior. Inside, there are intricate ceilings, red-velvet furnishings and gold-toned accents. I smile when visiting, knowing the joy it brings.

The Sheikh Zayed Mosque is the largest mosque in the UAE. The white marble against the intricate carvings and gold decoration is a marvel to explore. The complex covers over 12 hectares of land. 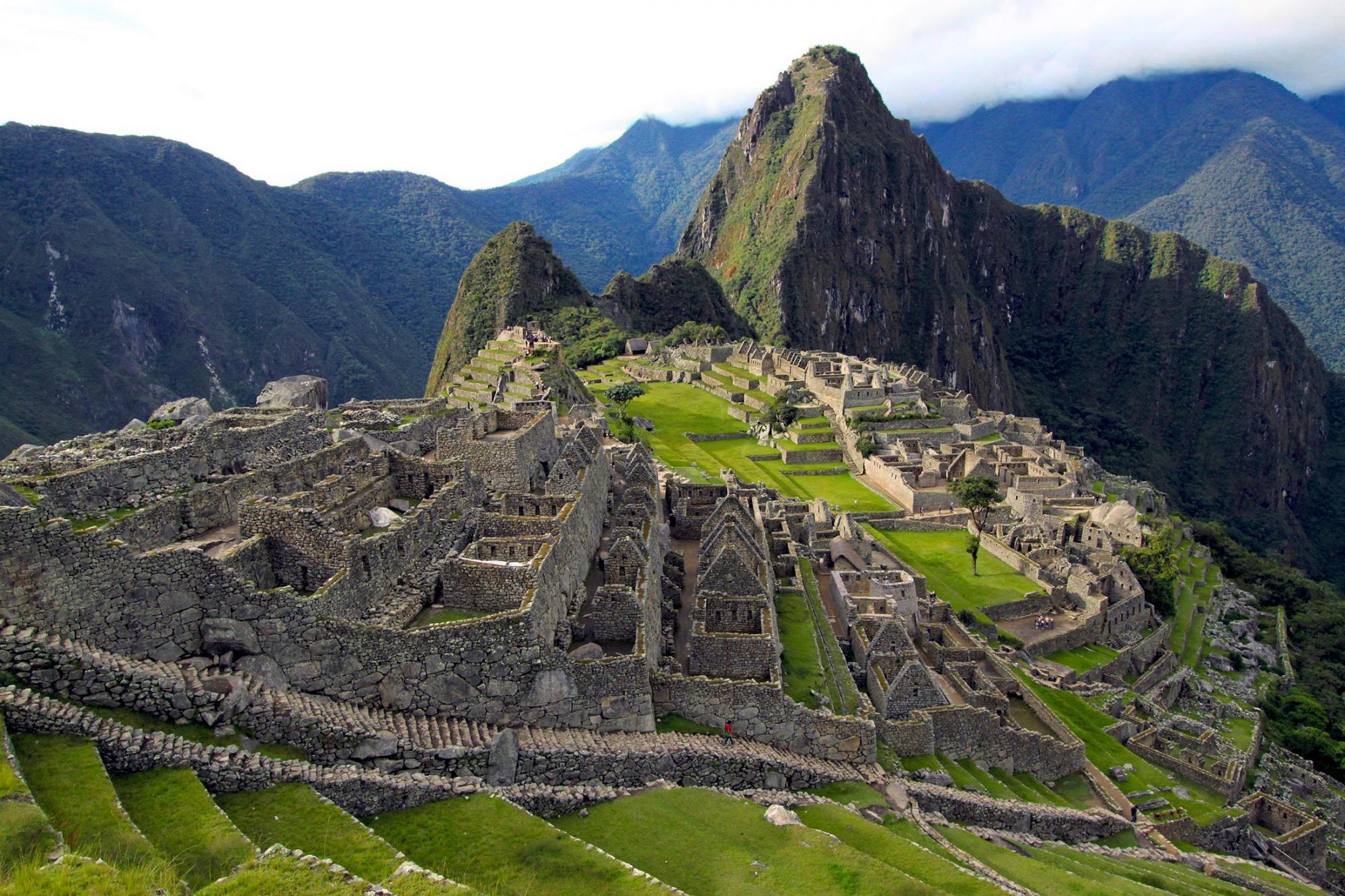 After visiting 95 countries, it should be difficult to choose the single most impressive architectural site I’ve ever seen. But there isn’t a doubt in my mind. It has to be Machu Picchu.

Built by the Incas more than 500 years ago, the city was used for less than a century before being abandoned, some say to protect it from discovery by Spanish Conquistadors. As a result, much about the site remains a mystery and perhaps that is part of its charm.

The city of Jaipur in Rajasthan, India has some of the most incredible palaces and temples we’ve ever seen. Our favourite is the City Palace, which is full of courtyards, gardens and other beautiful Instagrammable features.

Interestingly, Jaipur is nicknamed The Pink City because the former Maharaja Ram Singh painted the whole city pink to welcome his guest Queen Victoria in 1876, as pink is regarded as the colour for hospitality in India.

Situated along an important Silk Route crossroads, Bam Citadel’s massive 44-acre footprint and pre-Achaemenid structure makes it one of the largest adobe constructions in the world. Perfectly aligned for the most central and broad defensive view from within the fortress city, its architects foresaw the entire city’s layout and the building’s fluidly interconnecting geometries from it’s inception.

One of the largest and best-preserved castles in Europe, picturesque Corvin Castle in Hunedoara is surprisingly not a major tourist destination, giving visitors an opportunity to explore its beautiful Gothic-Renaissance style without any crowds.

From the bridge leading over the moat to the many levels, rooms, grand halls and towers, it's like a playground for castle-lovers, and one of the most impressive sights in all of Romania.

As soon as you turn the corner and catch your first glimpse of this place, the adventure begins and you'll be extremely happy that you added this castle to your itinerary.

The ancient city of Petra in Jordan was once an important capital and trading place for the Nabataean empire, from around 400BC, but it was left empty for centuries, until it was discovered in the 1800s. It’s now a protected UNESCO World Heritage site and the most popular attraction in Jordan.

Al Khazneh or The Treasury is an incredible achievement. When you stand on a hill in front of the monastery, it's not enough to call such a moment “majestic”.

You also need to explore the city of Petra at night, when the rocks shine with the soft light from the candles. In those moments, you have an incredible sensation that the stars will fall in your arms after a couple of minutes.

Ready to focus your lenses on some of the world's most photogenic buildings? Check out Light & Land's tours to cities around the world, including Venice, Paris, New York and Stockholm, at www.lightandland.co.uk/photography-tours.

Taj Mahal by Claudia Tavani (My Adventures Across The World) (