From the classic Alhambra to ‘Fifty Shades of Pink’, there’s plenty to explore and train your lenses on in southern Spain’s Andalucia region, says Peter Hendrie

Andalucia is such a magical place to me. It was the first Light & Land Tour I attended as a client in 1999, with Charlie Waite. From this moment on, I was lured to Andalucia and photography. Now, I lead this tour to Andalucia every February in search of the hectares and hectares of almond blossom in various shades of pink that line the steep-sided hills on the eastern foothills of the snow-capped Sierras Nevada mountain range. There’s plenty more to enjoy about this beautiful region, too, from cured ham to the Alhambra. 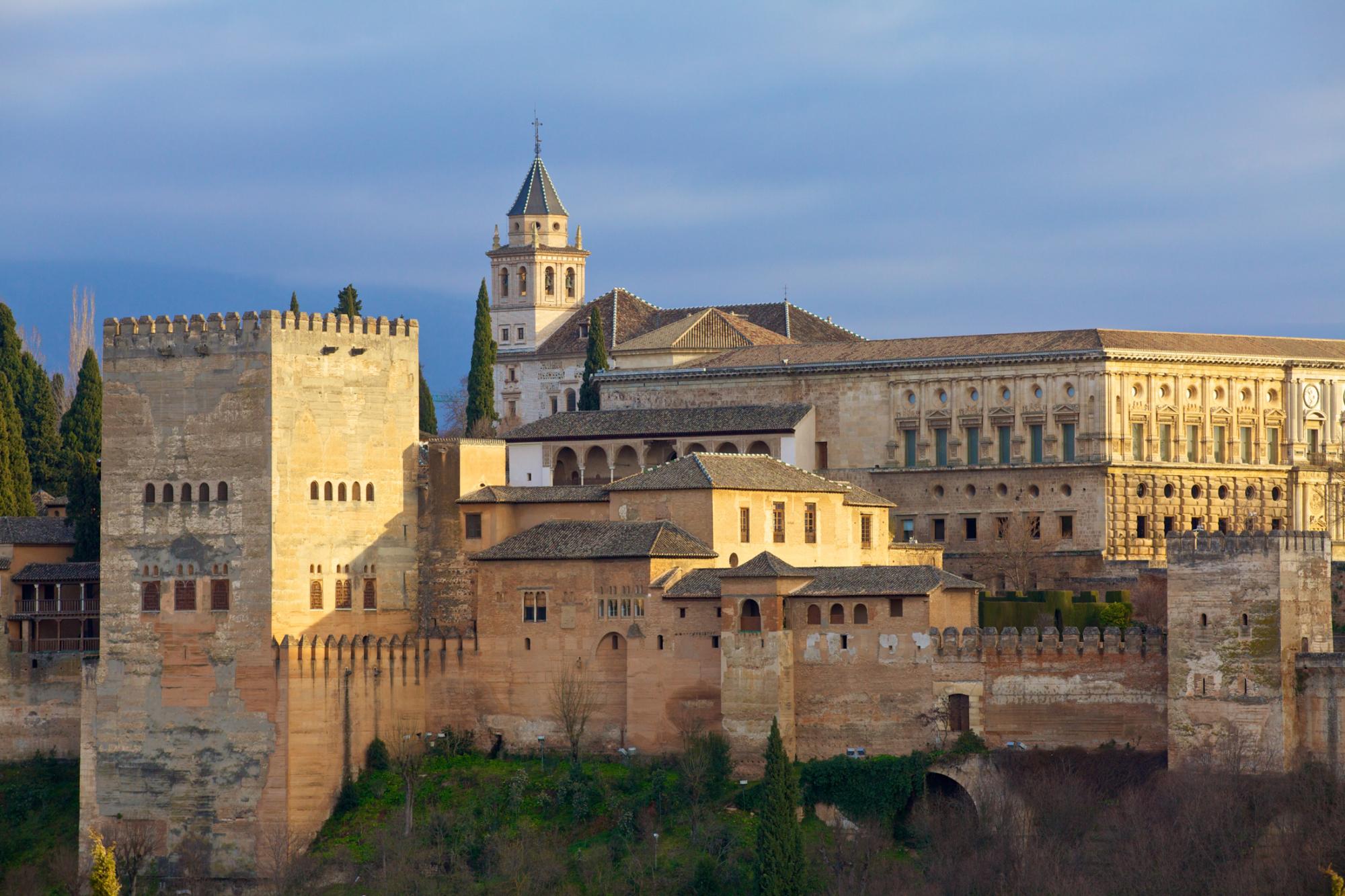 Known around the world, the Alhambra is the jewel in the crown of any visit to Andalucia. This a palace and fortress complex located in Granada. It's complete Arabic name is Qalat Al-Hamra.

A UNESCO World Heritage Site since 1984, it’s easy to understand the draw that this place has on us all. Considering the palace was built during the middle of the 13th century, its beauty remains remarkably intact. You have to marvel at the buildings’ intricate designs, detailed mosaics and hand-carved cedar panels.

Constructed by the Arabs as a stronghold, the Alhambra sits in a hillside location overlooking Granada, with unforgettable views of the Sierra Nevada Mountains and the rolling hills of the Andalucian countryside. 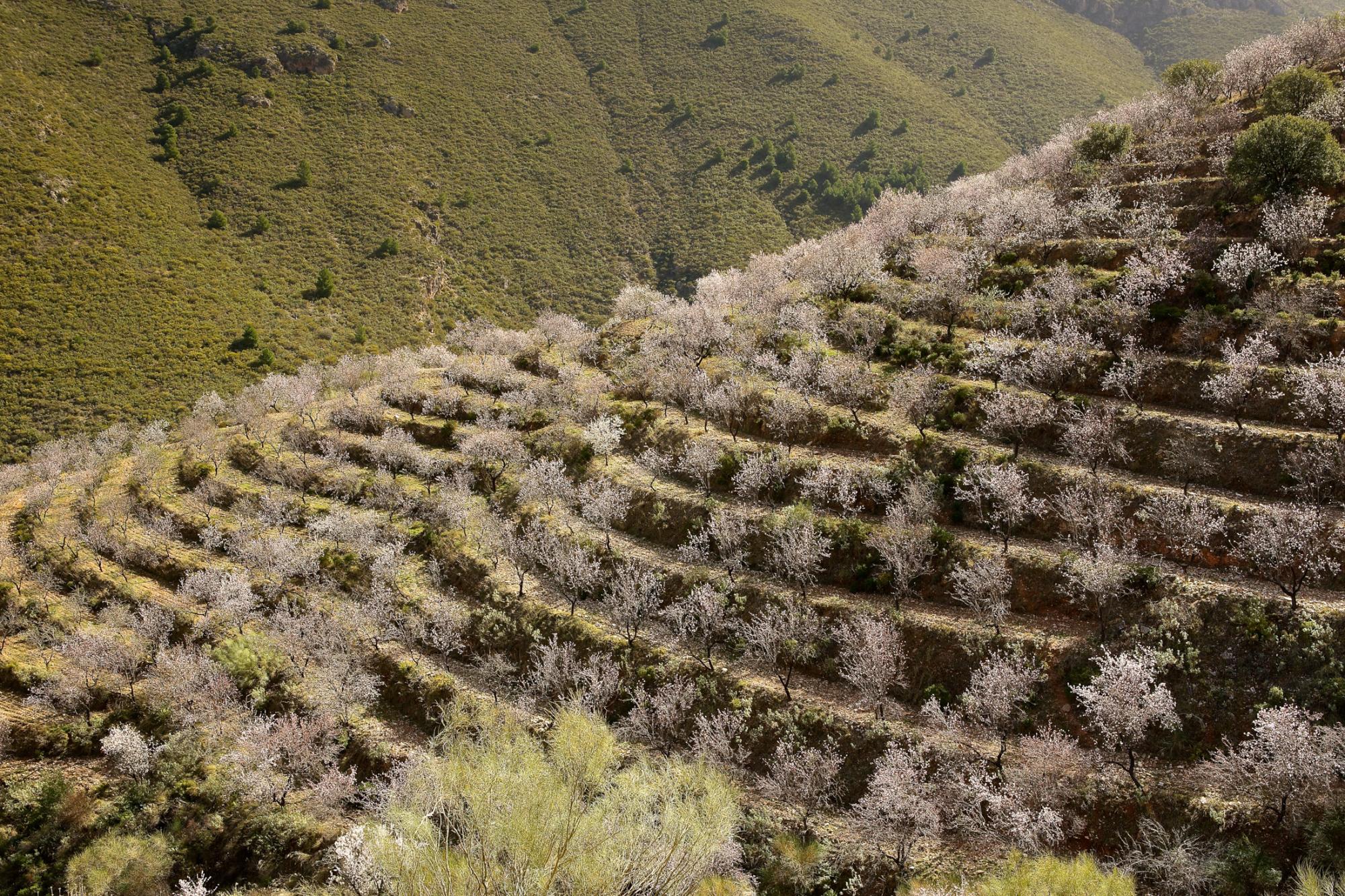 I’ve been lucky enough to visit and photograph some of the most amazing places around the globe, but nothing quite prepares the mind for the sways of shades of white and pink blossom that cascade down the hillside in the foothills of the Sierra Nevada Mountains in the Alpujarras region of Andalucia.

‘Fifty Shades of Pink’ pretty well sum up the feelings you get as you immerse yourself into the curves and crevasses, exploring grove after grove along the width and breadth of Las Alpujarras. These blossoms offer up some fantastic photographic possibilities.

Cast your mind back far enough to the era of the Spaghetti Westerns with those small villages that film directors would have you believe were set in the USA. They were actually often filmed along the Alpujarras and Almeria in the foothills of the Sierra Nevadas, not in Mexico or the States as you would have imagined.

Andalucia in one of the few places in the world where you can find such villages hugging the hillside like limpets to rocks, often perched precariously high up on outcrops.

Perhaps the most picturesque villages are the famous trio of Pampaneira, Bubión and Capileira that cling, one close above the other, to the slopes of the Poqueira Valley.

When the sun’s rays strikes the rooftops of Capileira mid-morning, the village illuminates the valley beneath the high peaks of the Sierra Nevada.

4: Peace, quiet and lots of space 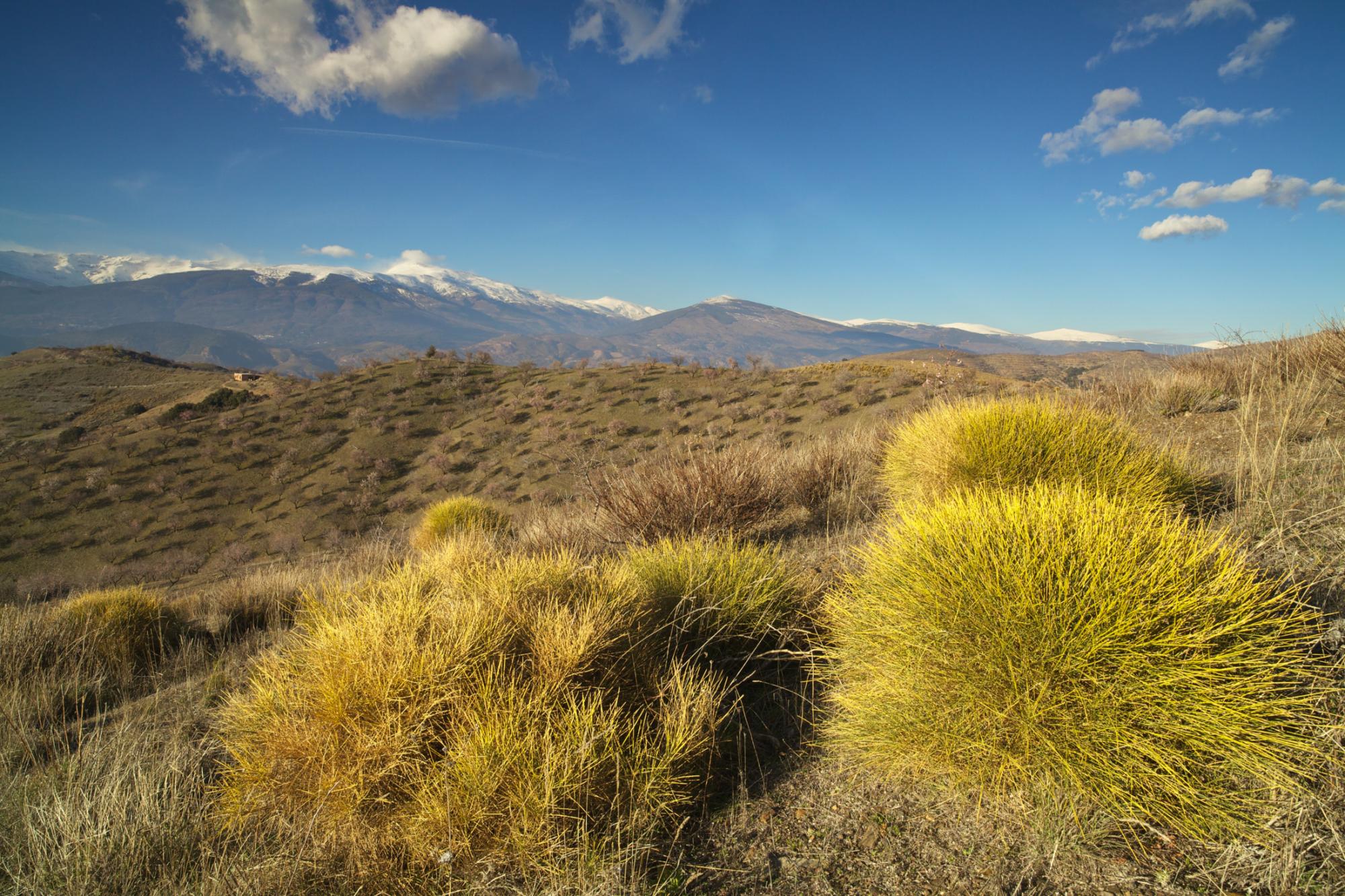 The Bohemian town of Orgiva, the base for Light & Land’s tour, nestles in the fertile valley of the Guadalfeo River. Orgiva is 20 kilometers from Capileira and is the largest town of Las Alpujarras. This laidback town is a draw for those wanting to escape from the hustle and bustle of modern day life. It’s truly relaxing to spend time here.

There are plenty of other ways to relax in Andalucia’s landscapes. Much of the land across Andalucia is protected as national parks or wildlife and nature reserves. Large sections of the coast remain unspoilt, with peaceful beaches waiting to be walked on or photographed. There are also plenty of quiet rural villages where the farming lifestyle appears much the same as it probably has been for decades, if not centuries. If space, peace and quiet appeal to you, you’ll find plenty of it in Andalucia.

At over 4,840 feet above sea level, Trevélez is the highest village in Europe, overhanging a fast-flowing river and plunging mountain valley with panoramic views across the valley and the sea beyond. Trevélez is famous throughout Spain for its superb mountain air-cured hams, or Jamón Serrano.

Span has developed an incredible reputation for food over the years, and you can expect tasty discoveries across Andalucia. Other dishes to try here include gazpacho, Gambas al Ajillo (prawns with garlic and chilli oil) and fried fish, but there are plenty more, alongside wines, notably the wines of Jerez, including sherry.

Peter Hendrie will be guiding the “Almond Blossom and Architecture of Andalucia” photography workshop from Feb 09-13, 2018. For details, see www.lightandland.co.uk/photography-tours/view/andalucia.

Later in the year, he’ll be leading workshops in Exmoor, including Astrophotography and Coasts & Rivers. See www.lightandland.co.uk/photography-tour-tutors/view/peter-hendrie.

All photos by Peter Hendrie. For more on Peter’s photography, see www.peterhendriephotography.com. 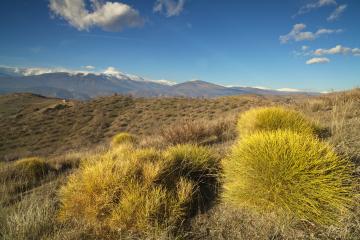 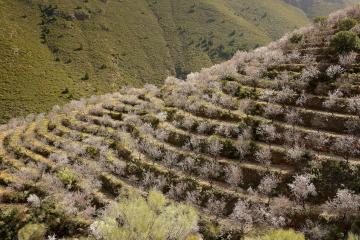 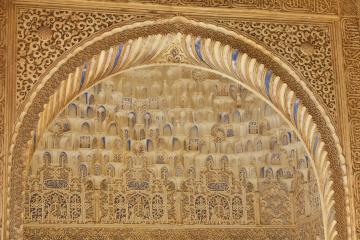 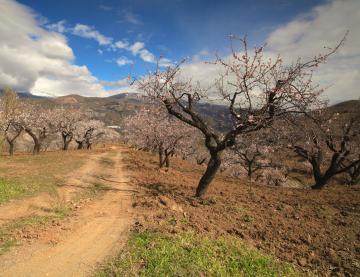 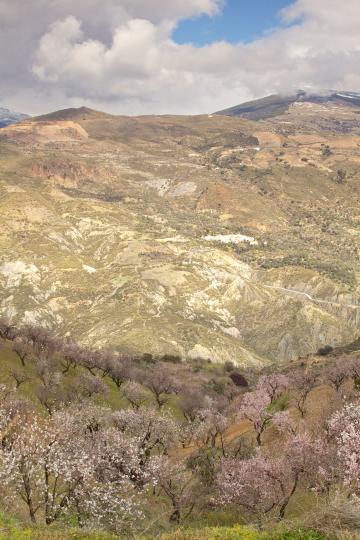 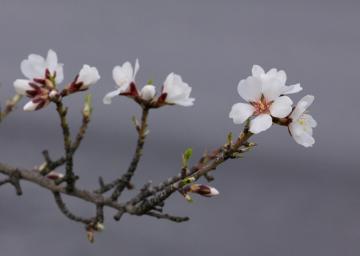 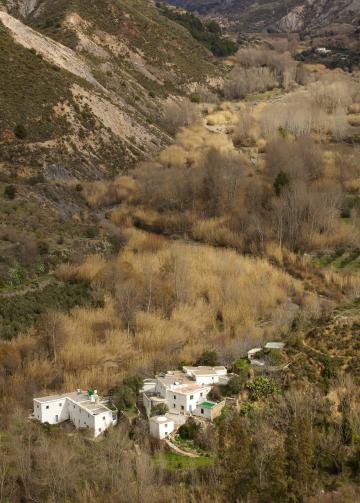 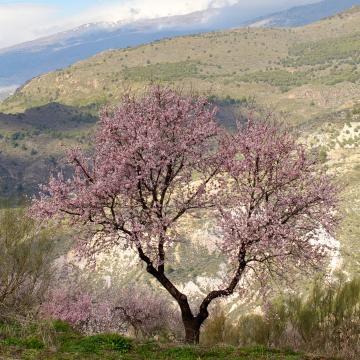 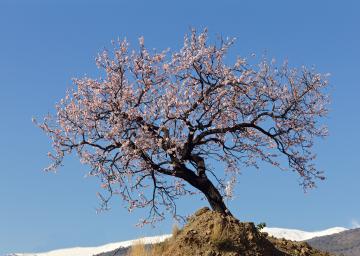 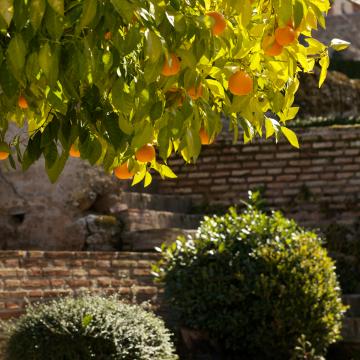 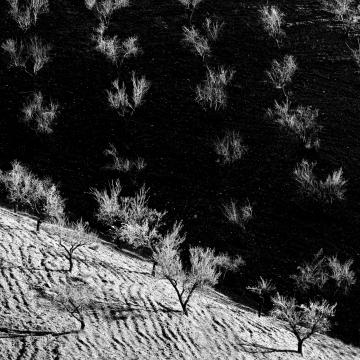