Travelling with a camera, from my early backpacking adventures to my present-day role as a photographic tour leader, has meant that I have developed an insatiable appetite for exploring countries far and wide. Many of my most treasured memories have centred around the people I met along the way.

When writing a selection of hints and tips for photographing people around the world it made me realise that it isn’t a one cap fits all exercise. Whilst in most countries it is generally acceptable and very much encouraged, there are some countries where it is socially and culturally frowned upon. Undertaking a little research before visiting will never go amiss.

Creating meaningful and long-lasting images of people going about their daily life is an art form in itself. The following are my top 5 tips for photographing people and hope they help to make your adventure an enjoyable and successful one.

1.Engage with your subject. 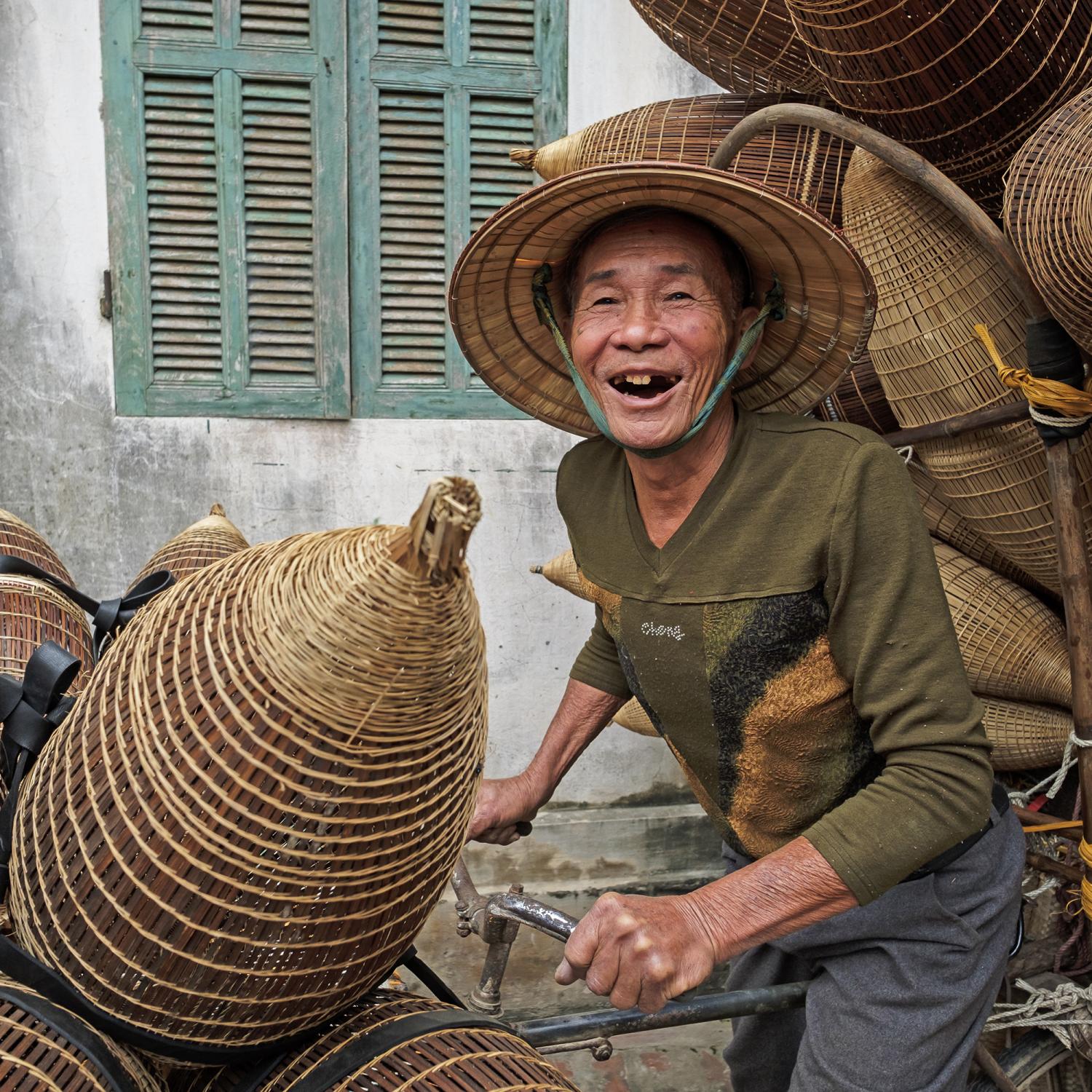 Smile, smile, smile! I find that my most pleasing images of people have been as a result of smiling when you make eye contact. A smile goes a long way towards gaining trust and being accepted, which in turn leads to a more relaxing relationship between photographer and subject.

I try to learn a few words of the local language such as the obvious “hello”, “how are you”, and, of course, “please may I take your photograph?” followed by a well-meant “thank you”! These may sound trivial but will almost certainly ‘open doors’.

Digital cameras give us a wonderful opportunity to show people how we photographed them. For some it will be the first time they will have seen a photograph of themselves and inevitably creates excitement and a willingness to be photographed again.

There are those who love being photographed and some for whom it is a complete no-no. Some need a little cajoling and they will usually enter into the spirit once the initial shyness is overcome. The gentleman in this image soon warmed to having his photograph taken and subsequently His smile said it all and I can’t wait to meet him again. 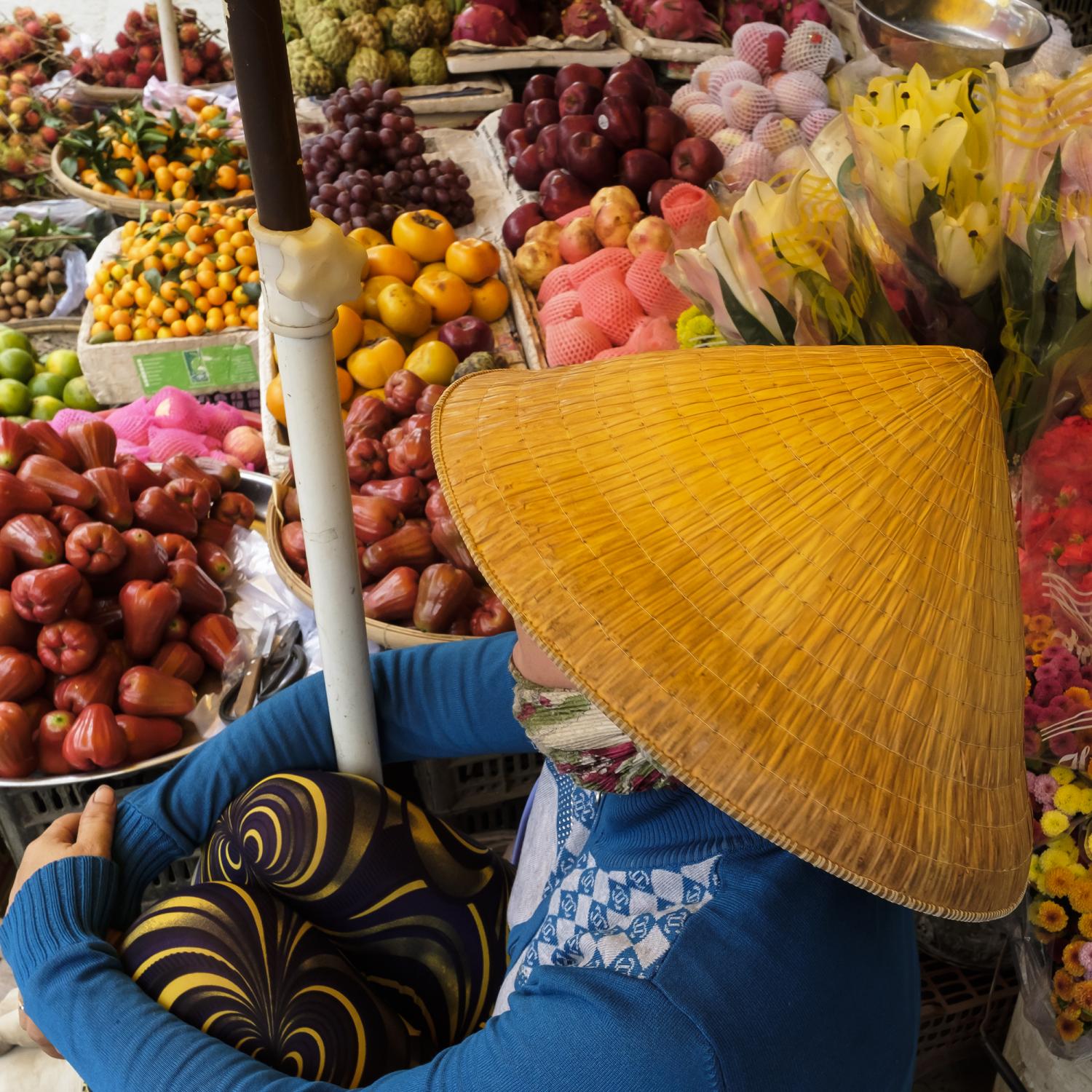 It is very easy when concentrating on photographing people from close quarters to forget the background completely. An image can be hugely more successful if careful consideration is given to the background – it can make or break it. I try to build relationships between different areas of the image – colour, shape, pattern, textures and even the behaviour or pose of additional people spring to mind.

The complimentary colours yellow and blue create a strong relationship in this image as does the similarity in textures of the hat, flowers and fruit.

Although the image doesn’t show it, this woman was laughing heartily as were many other market stallholders who found the few minutes of precious interaction totally hilarious.

3. Be prepared and seize the moment. 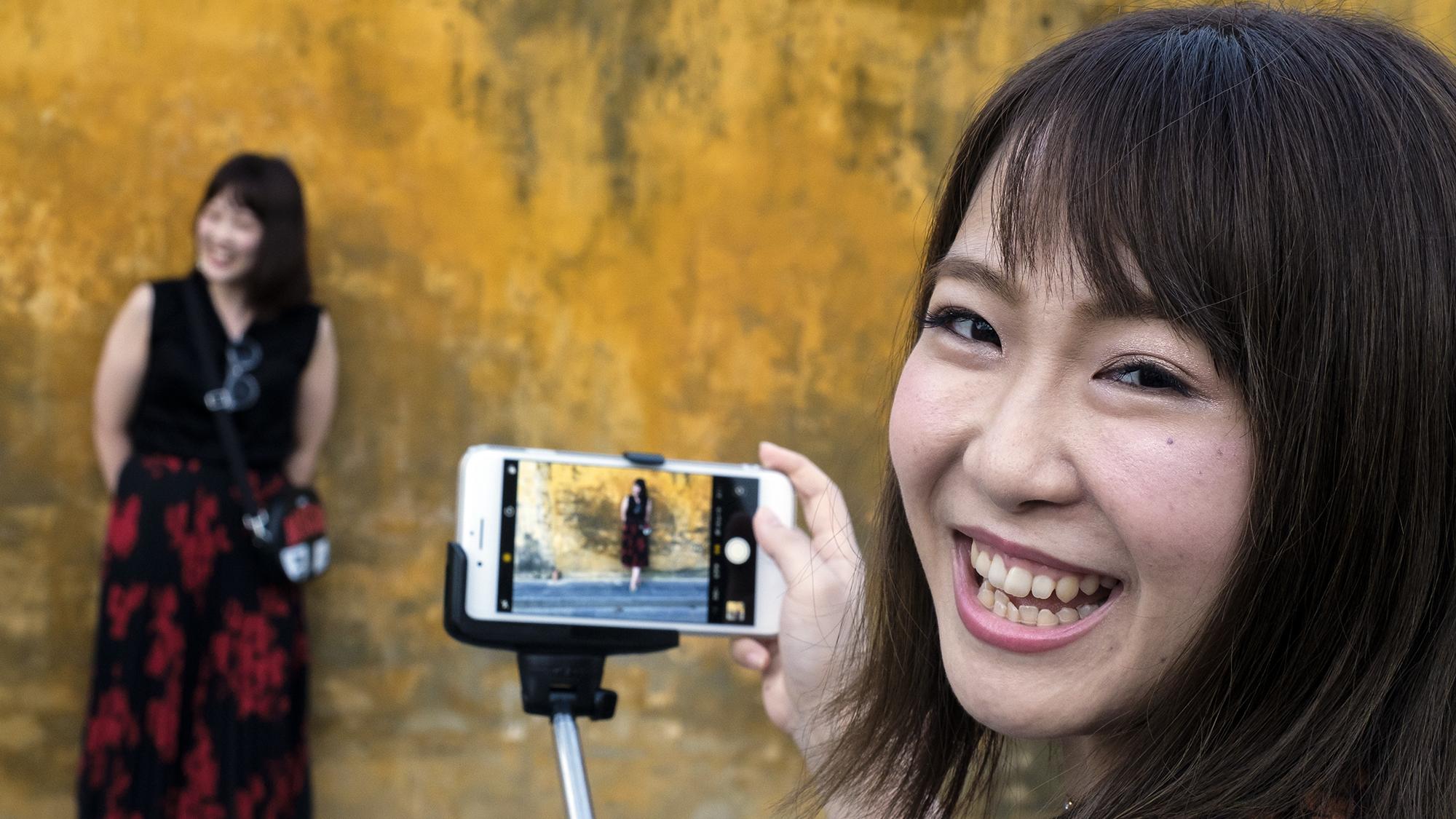 Some of my most memorable photographic moments are the images that I missed as a result of not being fully prepared. I literally blinked and the opportunity was lost forever.

Honing our observational skills and learning to anticipate what is about to happen helps us to capture those magical moments. Having a hand-held camera at the ready can often be an advantage and save time. Those precious seconds can make all the difference. I occasionally use program mode, take a shot then change the settings to something that would allow me to be more artistic using aperture or shutter speed priority, then re-shooting if possible.

This image is one of my favourites from a recent tour to Vietnam and happened out of the blue. Hoi An is a World Heritage Site and consequently is a popular tourist destination. The ancient architecture is a photographer’s dream particularly the old walls which exude character. Although the walls are particularly photogenic in their own right their beauty is enhanced when combined with other subjects – these two friends were blissfully unaware of my composition until I showed them the outcome. Giggles all round followed.

4. Think outside the box. 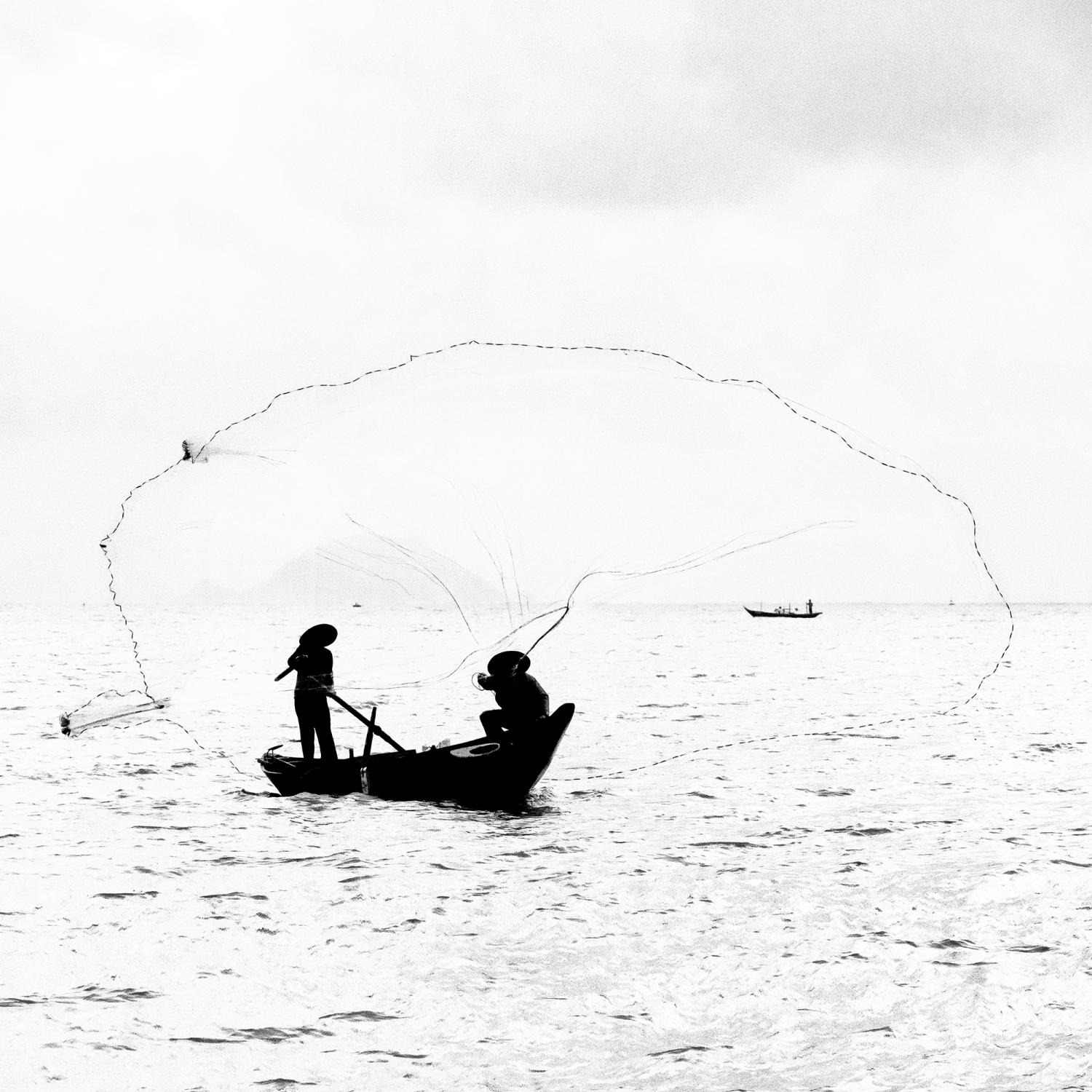 This image of fishermen at work was taken early in the day and the making of it proved to be a challenge. I had pre-visualised a composition of sorts even before arriving in Vietnam. However, the conditions on the day were less than perfect; the light was lacking in contrast, the colours were muted and the boat in which I was travelling was bobbing up and down incessantly as the skipper did his best to get into a decent position to photograph the net being cast.

I quickly had to form a plan B in order to give me an image with which I could be proud. Knowing that a seemingly uninteresting scene can be vastly improved in post-processing I ignored the colour and imagined the scene in terms of high-key black & white tones whilst continuing to shoot a few frames. I felt I would be able to make the resulting image more effective during my post-processing and I’m pleased to say that this graphic representation of the fishermen will now be added to a growing collection of similarly processed images. 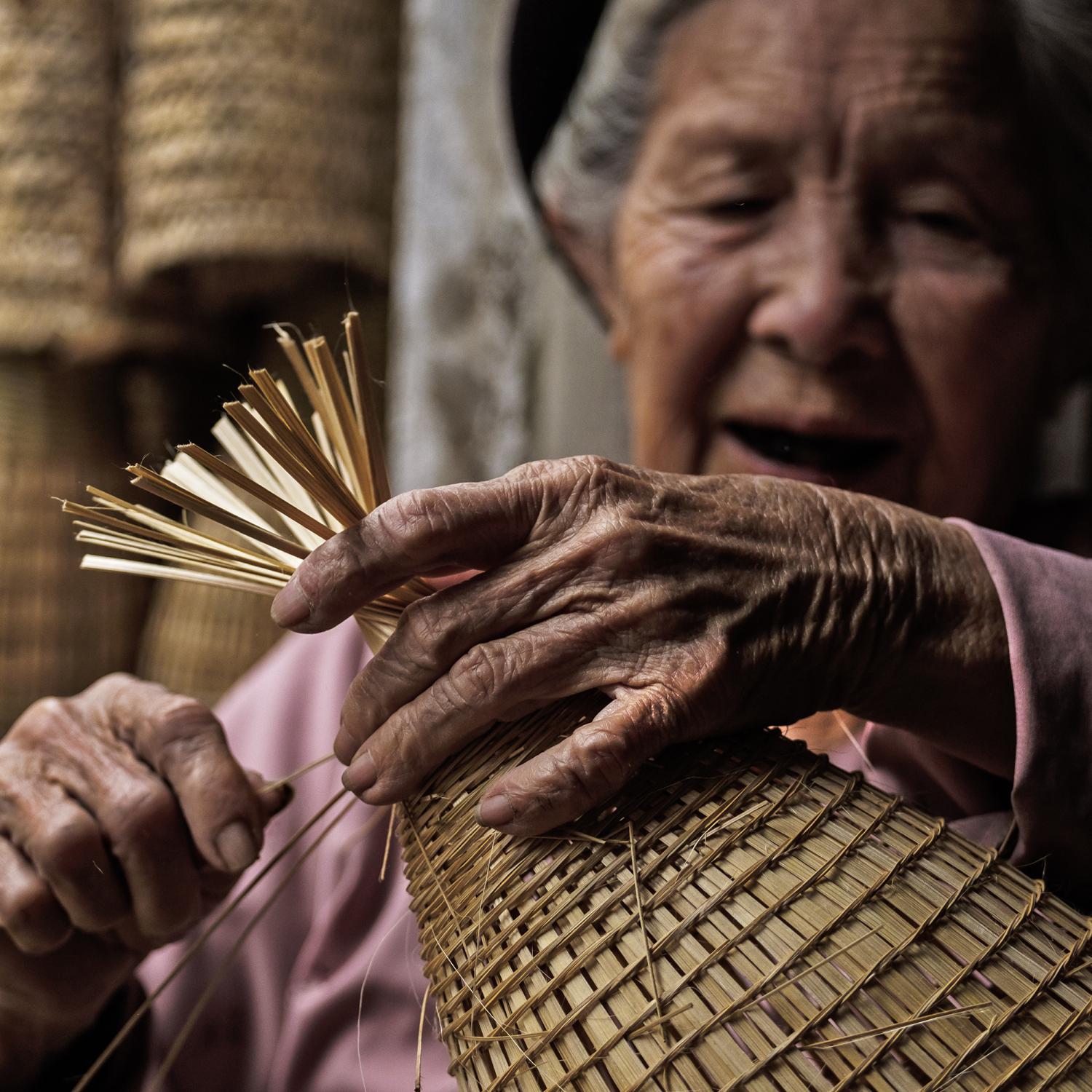 When time is not the essence it can be very rewarding experimenting with different techniques to help get the best out of the subject.

This Vietnamese lady is one of a few remaining skilled weavers who make fish traps out of bamboo. I was fortunate to spend two hours in their outdoor workshop and much of that time was looking for the one image that meant a lot to me. We gradually built up a lovely rapport with her and I was delighted that she was comfortable with me photographing her.

Using a long focal length lens and positioning myself a few metres away from her allowed me to concentrate the focus on her hand, whilst throwing her face sufficiently out of focus. Above all it was the beautiful side-lighting that made the image come alive.

If you would like to join Clive on a Light and Land tour you can see all of his upcoming tours here.